Every time I have the opportunity, I say (as a sort of apology) that I am a self-taught 2D animator with very little experience. There are a lot of firsts for me, working on Blood will be Spilled and trying out 2D rigging of characters was one of them. During the last two years I have done quite a few animations for the game and then redone them again and again until I finally found a process and a personal set of rules that seems to work for me. I would like to tell you about them using one of our characters as an example.

When doing a character animation we always start out (well, obviously) with designing the character. Every character serves some purpose in the game, whether it’s an enemy, a major NPC or some insignificant character in the background. So during the design process, we ask ourselves questions like: ‘Will this character stand on two or four legs? Are we planning on changing his clothes and accessories in the future? Do we need him to walk, run, fly or fight?’ etc. Then, my brother does some sketches and then move on to drawing up the final design. For more important characters we usually have some ‘mood’ pictures as well, that tells us more about the character (and they also serve us as marketing materials). 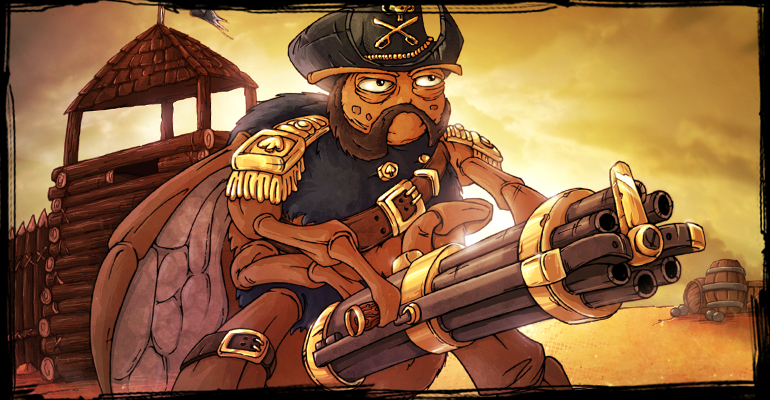 I’ll admit that this sounds a lot more sophisticated than it actually is. What I mean by “rules” are some personal principles I try to follow every time I do an animation:

Cutting the character model in pieces

First thing I do with a character model is cutting it into pieces. With insects, this is a little easier to do than it would be with human characters (because who would want to cut humans into pieces? What are we, mafia?) as their bodies are naturally divided into parts (Insects, from Latin insectum -“cut into sections”). Then I put the character back together and export all the parts as individual images. 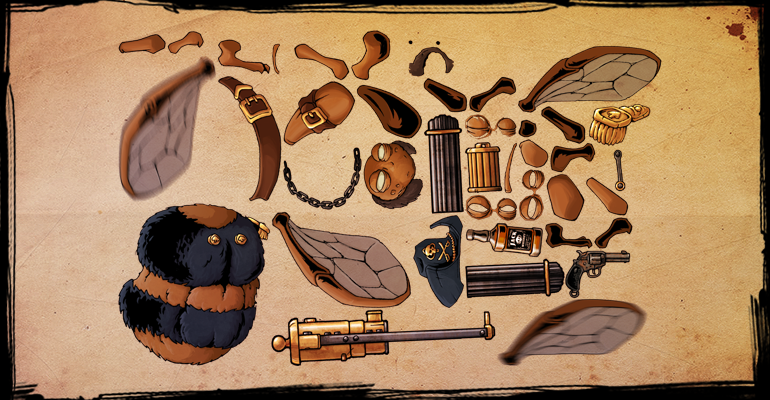 Importing into Spine & creating a skeleton

For 2D animation I use Spine by Esoteric Software. It is a 2D rigging software in which each image is applied to an appropriate bone of a skeleton. This is the first step on the journey of breathing life into our characters.

Once everything has been set up I start animating. With characters like Ace, for example, I always have a checklist of sorts of all the animation we need him to have. Usually this includes idle (calm), idle (aggressive), walk, run, shoot, crouch/cover and sometimes flying.

Some of our characters also have some funny idle animations which adds a bit more flavor to the character. Usually, if I wasn’t able to put some humor into other animations, I try to supplement it in these special ones. For example, in the animation below, our character Ace (inspired by heavy metal icon Lemmy) takes a sip from his bottle of bourbon.