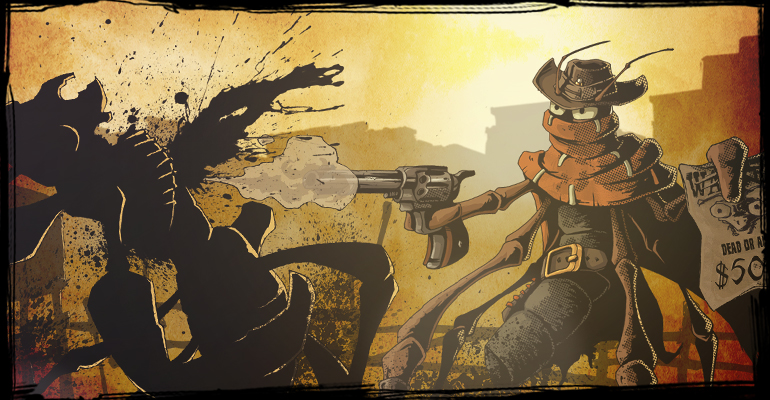 From the very beginning, our plan was to build the game heavily on stereotypes and cliches and to find some interesting and funny similarities between the world of old spaghetti (Italian) western movies and the (stylised) world of insects. And you can do that only if the audience is familiar with both, otherwise it’s just plain weird. Many things we use in the game are metaphors, equivoques (double meanings or puns) and references and the same goes naturally for the main character. Let’s take a closer look at some ideas behind the creation of a mosquito gunslinger Jack.

Jack is a mosquito, a bounty hunter. At least what’s left of him… They betrayed him, broke him and left him to perish out in the wastelands. But he managed to survive. And for some people, that’s bad news. Because he will have his revenge and blood will be spilled.

Warning! This blogpost contains movie spoilers. Even though the movies mentioned are mostly more than 40 years old, some people may need a warning. So, consider yourself warned.

Do you remember the stranger who arrives into a small dusty town in “A Fistful of Dollars” (1964) or in its derivative “A Stranger in Town” (1967)? Or the man in the long union overcoat knee-deep in mud towing a coffin in “Django” (1966) or the mysterious nameless harmonica player who arrives with a train in “Once Upon a Time in the West” (1968)? Then you get the idea. And if you spent last 50 years in jail and never heard about those movies, be sure to take a look at them. Most of the movies mentioned in this article are among the best this genre can offer. 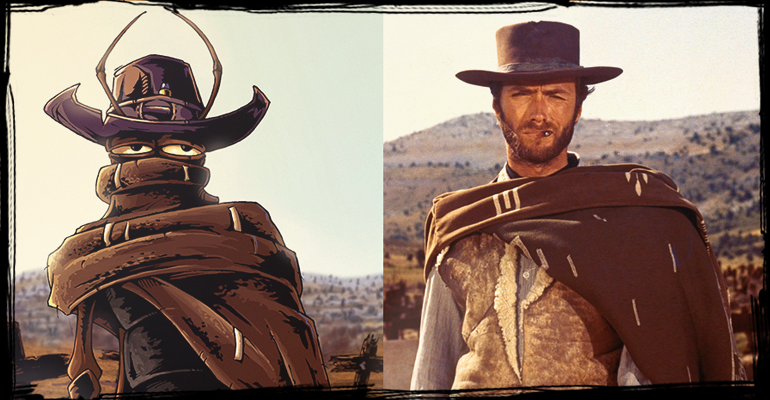 In this tradition Jack is a rather silent type of an anti-hero, always with the sharp look and lightning-fast gun handling skills. He’s a drifter coming from a dusty wasteland and then disappearing again into the sunset.
Even the name of the main character – Jack – should in fact evoke the spaghetti western tradition. Protagonists often have pretty odd names like Ringo, Sartana, Django, Mannaja, Johnny Yuma, Navajo Joe, Indio Black or even Cemetery or Trinity. Clint Eastwood’s character in The Dollars trilogy is once called “Joe” by the undertaker, another time Monco (or Manco, which means single-handed in Spanish) and then referred to as Blondie (for his hair and skin color), clearly neither of these being his real name. In “The Great Silence” (1968) the gunslinger is only referred to as Silence (yes, he is mute but that’s not why he’s called Silence – they call him that “because wherever he goes, the silence of death follows.”). Now there is Jack, the lowest face card in the deck but at the same time “Jack of all trades” with many useful skills and unpredictable but quick as “Jack in the box”. But you still don’t know Jack…

A bounty hunter is someone who captures outlaws for a reward. Despite the fact that he basically captures or kills bad guys, it’s not an act of altruism. Many characters in the spaghetti western cinematography were bounty hunters or at least gunmen for hire. Almost every Clint Eastwood’s (“For a Few Dollars More” (1965)) and a lot of Lee Van Cleef’s (“The Big Gundown” (1966)) characters are some kind of bounty hunters, Gianni Garko is the bounty killer Sartana in the Sartana “series” and Silence in “The Great Silence” (1968) is a bounty hunter who only kills other bounty hunters “who under the guise of legality made violent murder a profitable way of life”. It is a nice way of creating a protagonist of questionable morality – make him look like a good person in some way yet still let him kill more people than the plague during the Middle Ages. 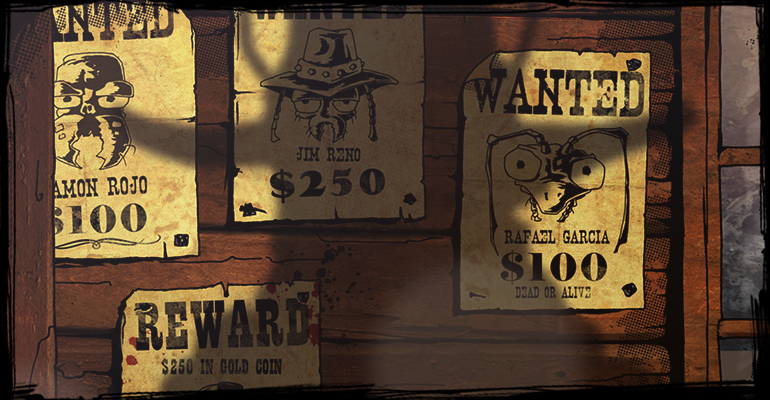 That’s why we chose Jack to be a bounty hunter by profession – not only in a tradition of spaghetti westerns but it also lets the player to choose a path or a play style in a wider context. Furthermore it helps us justify the core gameplay elements, as killing bad guys is Jack’s actual work. It also works for us, because now you can actually get monetary reward for killing enemies instead of just some score points. Later we also want to implement a couple of game mechanics (which we mockingly call “the killer life”) where you can earn money according to the finesse and effectivity of sending your enemies to kingdom come. From the storytelling point of view, this way we can create interesting conflicts, in which the protagonist’s rather simple agenda of capturing criminals can interfere with some greater scheme and drag him deeper into trouble.

Beaten to a pulp

Fairly regularly in spaghetti westerns, protagonists are severely beaten up almost to death, tortured, shot or mutilated, only so they could rise and defeat the whole gang of bad guys in the end. There is one nice explanation for this: “It takes the whole gang to beat him up, as he is more than a match for them individually.”[1] We can see examples of this in “A Fistful of Dollars” (after Joe’s double play has been revealed) or in “A Stranger in Town” (when Stranger is double-crossed by the bandit leader). Sergio Corbucci is even known for not letting his characters to recover before the final fight – Django’s hands are crushed (“Django”) and in “The Great Silence” the hero’s shooting hand is badly burnt and shot. Jack was also betrayed, brutally beaten, his proboscis (that’s the pointy thing mosquitoes use for sucking blood) was broken, his wings were torn off and he was left for dead in the middle of the wasteland. This is not only a tribute, but also a practical choice for us, but more about that a moment later. 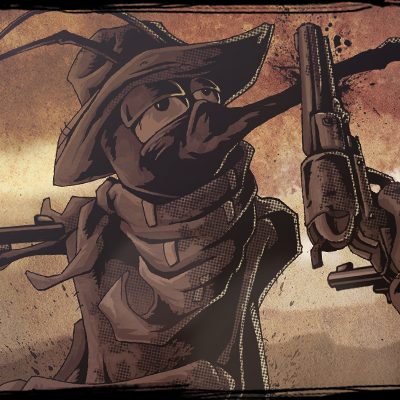 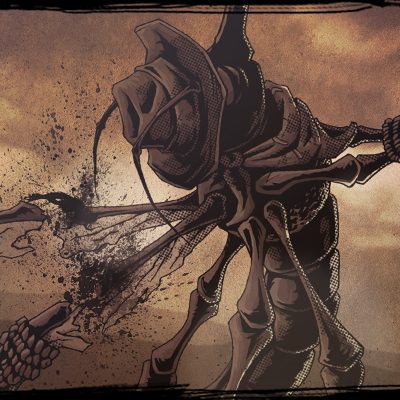 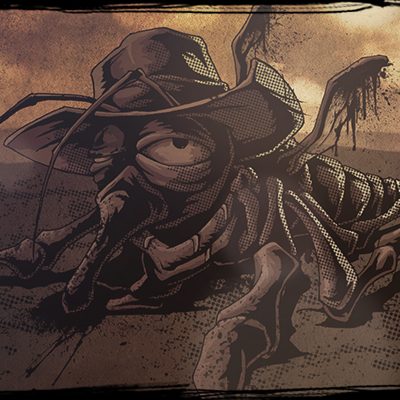 “Somebody once wrote that revenge is a dish that has to be eaten cold. As hot as you are, you’re liable to end with indigestion.”~ Death Rides a Horse (1966)

Revenge is a quite a popular theme in westerns (not just Italian), so much that there is a whole sub-genre of revenge western stories. In “Hills Run Red” (1966) ex-convict seeks revenge upon his former partner who betrayed him 5 years ago, in “Death Rides a Horse” (1967) a boy whose father was killed and mother and sister were raped and murdered in front of him by a gang, sets out 15 years later to exact his revenge.  “Once Upon a Time in the West” features the harmonica player seeking revenge for the death of his older brother. We can argue why, but the truth is, it grants not only a motivation and some kind of personal commitment to the hero towards the story itself, but also as Quentin Tarantino once said it creates an emotion which the audience (in our case the player) is familiar with and is quite easily understandable. This is not something new. Revenge as a plot device was highly used not only by the master of revenge drama William Shakespeare but long before that in ancient greek tragedies. Therefore western movies can be easily perceived as a reimagination of this topic. 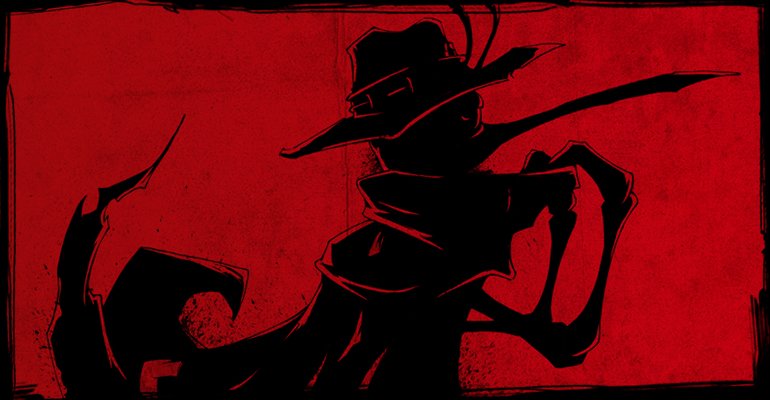 Jack was betrayed and left for dead. You don’t need to know how and why but you still have the reason for a vengeance. That’s why we choose to use our paraphrased tagline “Revenge is a kind of justice”.

From the world of insects the mosquito was a pretty obvious choice for a main character – his lust for blood is a metaphor for his path of revenge. Of course we still had to take some creative liberties and do some stylisation. Maybe now it is the right time for a little biology lesson. Many species of the mosquitoes are ectoparasites – they are adapted for sucking animal and human blood. But this applies only to female mosquitoes. As we wanted to stick with the archetype of a male gunslinger desperado, yes, Jack is a male mosquito and he can suck blood. He can also shoot a sixgun so what? Another tweaked fact is that the insect circulatory system uses hemolymph – fluid analogous to blood, but instead of red hemoglobin it contains hemocyanin, a copper-based protein, thus it is green. As the green color has a different meaning and green blood is more associated with sci-fi alien creatures than western movies, in the world of Blood will be Spilled all blood is red (as a color of anger and hatred and… well, blood). You could say that bugs walking on two legs is also some creative liberty, but hey, we are not the first with this one, nor was Pixar, for that matter.

The most noteworthy part of the Jack’s character design is certainly his poncho, which recalls the man with no name (from the Dollars trilogy) or Stranger, but instead of earthy green or grayish tones we choose bright red as a color of blood. Ornaments on the cloth also resembles that of Clint Eastwood’s. Jack’s poncho is the symbol of his revenge rampage and bloodlust but it should also “highlight” the character on the screen. Since the poncho is basically just a piece of cloth, we wanted to use it to emphasize the movement of the main character. When Jack walks, his poncho waves behind him in the wind and when he jumps the poncho traces his movement in the same way as a superhero cape would. It’s pretty badass if you ask me. The poncho covers Jack’s face – firstly because Jack doesn’t want his enemies to find out that he is actually still alive, until it’s too late for them. And secondly it hides his broken proboscis until he is ready to suck blood. It covers his broken wings too, because he can’t use them for flying anyway. Here we must honestly admit the inspiration by the vampire Raziel from the Legacy of Kain series. 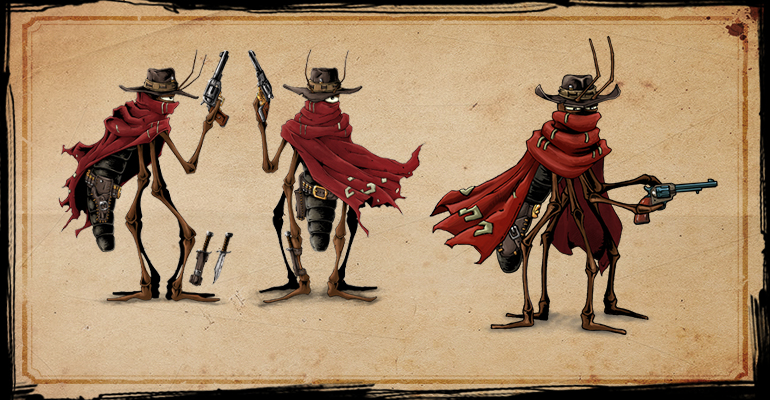 Destroying Jack’s wings was a game design decision at first. We didn’t want to have a platformer where you can fly over every horizontal hazard and you don’t even need to jump. It would affect the level design and the overall game experience in an unwanted way. It’s also incorporated into the story as his wings were torn off so he could not escape from the desert, but also in the world of our game, non-flying insects are considered scum and a lower class citizens compared to flyers. So it is Jack’s fall from grace and also facade in the same way.

Last thing to mention is the Jack’s hat. A nice hat is a pretty important accessory for every gunslinger. This one is inspired by that of Eastwood’s character from “High Plains Drifter” (1973) (which is not a spaghetti western actually), mainly because I really like that pretty nice bond, where Jack carries one bullet prepared just for the main villain – but let’s just stop right here.

If you want to see what awaits Jack in the future, be sure to check our facebook and twitter from time to time for the latest info.