Entomology (from Greek “entomon” literally means “cut up or divided into segments”) is the scientific study of insects. In the past the term “insect” was more vague, and historically the definition of entomology included the study of terrestrial animals in other arthropod groups such as arachnids, myriapods, earthworms, snails and slugs.

Creation of the world and all of its characters in Blood will be Spilled is a part of still evolving and complicated process therefore it’s a bit hard for me to explain how and why exactly I decided to combine Wild West genre with the world of insects.

In fact, at first I wanted to create the world of insects for a completely different game. Later I started to play with adding different layers to the mix. Eventually, it came to the Wild West since I am a big fan and Blood will be Spilled was born. 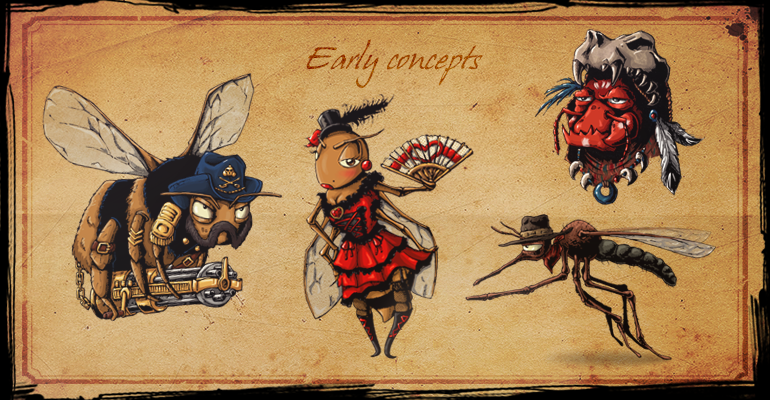 Last year I came across this amazing GDC15 talk by designer Feng Zhu in which he quite nicely explained a very similar creative process (especially topics: Ask What If?, Mix Familiar Surroundings, Play with Scale and Different Life Development). If you are interested in character and environment design, I really recommend watching it.

Insects are pretty badass. There are more than a million described species of insects and this number represents more than a half of all known living organisms on this planet. Insects may be found in nearly all environments and they are among the most diverse groups of animals. They look like tiny aliens from outer space and people mostly consider them scary or disgusting. Typical insect has a segmented body organized into three parts – a head, a thorax and an abdomen, all supported by the exoskeleton (a pretty hard armor made of chitin). Typical insect also has six segmented legs attached to a thorax and either none or up to four wings.

And it’s a jungle out there, a real “bug eat bug” world, the survival of the fittest. So if you take this and mix it with a pretty harsh life in the American Wild West era, you could come up with some interesting ideas. For starters, how would a fly-gunslinger hold his gun when he has no fingers? It’s quite simple. The same way as flies and other insects walk up walls and ceilings – the parts at the end of insect legs possess claw-like bristles or hairs that are used to grip the tiny irregularities on rough surfaces. If the surface is smooth, they could use the adhesive sticky pads. Makes sense, right?

I had an indistinct idea of hierarchical society, where non-flying insects are considered inferior, mostly workers, miners but also gangsters, bandits and other low-lifes (literally since they cannot fly). “Flyers” are businessmen and everything you expect to be a higher class. I originally also wanted to have some rules for legs, something like flying insects will use just two legs for walking and will have four arms, while non-flying insects will use four legs for walking to keep stability and speed since they cannot fly. But it started to be quite restrictive regarding the game design (and animating four-legged characters is quite a pain, as I was told). So currently there is no such rule. Basically, it depends now on the specific character.

Before I really start talking about the characters, I want to mention two more things:

Mosquitos are small (typically 3-6 mm) insects. Even the word “mosquito” means “little fly” in Spanish. Maybe the most notable part of the body is the proboscis – the tube-like mouthpart that female mosquitoes use to pierce the skin and consume blood (although Jack is not a female, mostly for genre stereotypes reasons). Mosquitoes are ectoparasites which I used as a metaphor for the lust for vengeance. They can be also pretty deadly, although not directly, they transmit some really bad viruses like malaria and yellow or dengue fever. Which makes them the #1 deadliest animals in the world. It is a good parallel with a gunslinger, leaving a trail of dead bodies behind him, if you ask me. Jack is morphologically loosely based on Aedes aegypti, which is considered to be among the most widespread mosquito species.

The head of the mosquito is specialized for receiving sensory information – the antennae are important for detecting smells (ammonia, carbon dioxide, lactic acid, and octenol) and two compound eyes are distinctly separated. Three pairs of legs and a pair of wings are attached to the thorax, but we decided to use the first pair of legs as “arms” and  remaining four legs for walking. The abdomen of a mosquito can hold three times its own weight in blood. Consider yourself warned.

Ideas behind the main protagonist are pretty extensively described in one of my previous articles, so if you haven’t read it yet, please do so :) 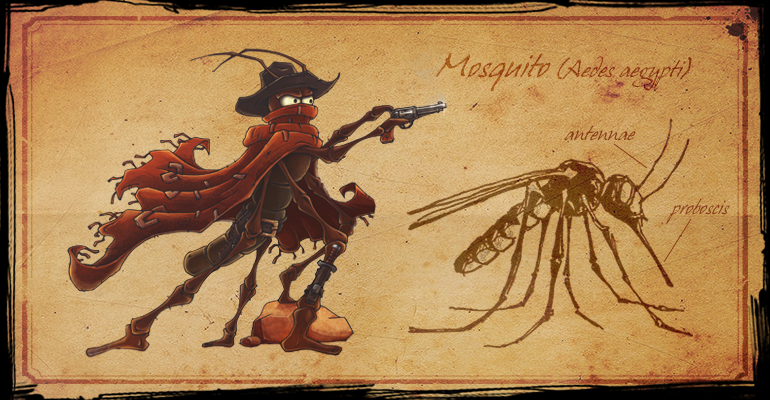 The idea behind the Queen of Hearts arose when I wanted to create two powerful allies for Jack with different abilities. One of them should be a strong and distinctive female. She is a bit inspired by characters like Jill (Claudia Cardinale) in “Once Upon a Time in the West” (1968), capable not only of taking care of herself, but also helping and protecting others. Queen is literally the queen bee, as bees have a defined social caste system. There is normally only one adult queen female and she is usually the mother of most of the bees in the beehive. So in the game, she is the boss and owner of the Saloon/brothel/hive called Hearts – a safe haven not only for all of her girls, but also for anyone in need. Notice that most of the lead female characters in Spaghetti Western genre are dancers, concubines or actual prostitutes. Wild West frontier was a bad place for a proper lady back then. Speaking of dancers, did you know that bees actually communicate with each other by dancing?

As the name implies, the honey bees produce honey. Honey is a biological mixture of inverted sugars, primarily glucose and fructose – utilized in the game to create honey beer and served in the Saloon. Bees have a pair of large compound eyes which cover much of the surface of the head. Antennae contain many organs for detecting smell, taste, and air movement. For Queen of Hearts I decided to use antennae to substitute eyebrows to emphasize her emotions (mostly sarcasm and contempt :) ).

The last three segments of the abdomen are modified into the sting. Although Queen of Hearts doesn’t use her sting, she uses a double barrel shotgun, which is basically the same thing. It was quite a challenge to make a sexy bee, but it was fun and I really like this character. 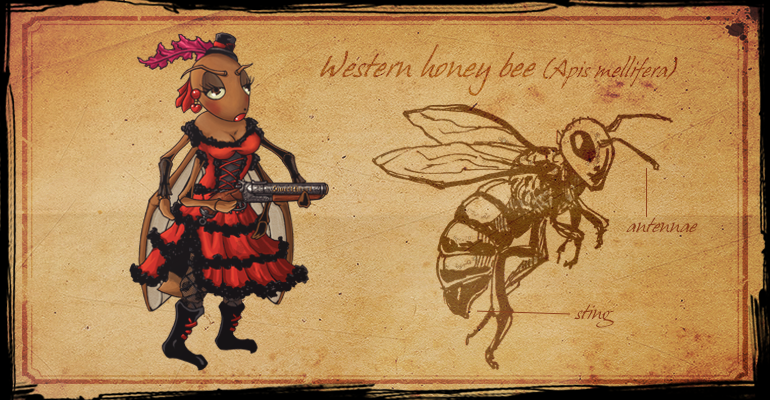 Bumblebee is one of my favourite insects ever since I was a kid. It looks like a big nasty turbo bee on steroids and makes a lot of noise with its wings, but it’s actually a good guy. Yes, bumblebees are quite big (15 to 40 mm), plump, furry and are generally not aggressive and ignore humans and animals except when protecting their nests. Compared to honey bees, bumblebee has a broader body, a rounded tip of the abdomen and fewer stripes. Two years ago when I was creating Ace as the second ally for Jack, I wanted him to be the big, grumpy and noisy war veteran soldier, but with a good heart. And the bumblebee fits this description perfectly. Ace as the commander of a platoon full of angry hornets may be quite strict sometimes and thanks to his size he can easily grab the gatling gun and make some real noise. His likeness is for many reasons significantly inspired by one legendary heavy metal musician who has passed away recently, and also by the Union Cavalry sergeants in the American Civil War.

Bumblebees have the active thermoregulation and can absorb heat from sunshine, so they could be active even in cold weather. Their way of flying is also quite interesting, if you take into account their body size and aerodynamics compared to the size of their wings. Bumblebees beat their wings about 200 times per second using so called asynchronous muscles, which is a quite energy efficient system consisting of muscles vibrating like a rubber band on their resonant frequency. 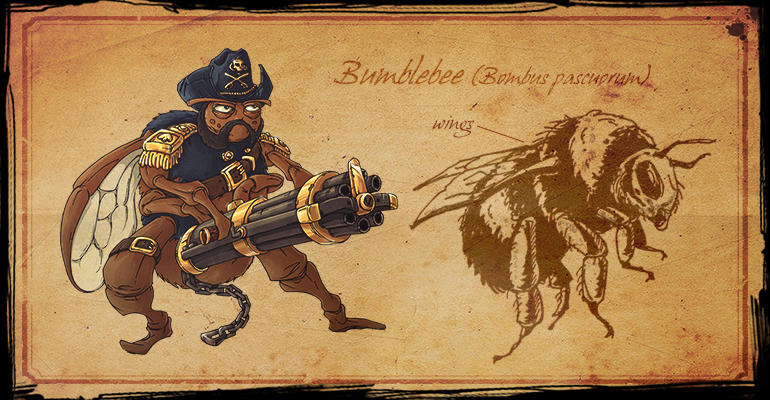 Ants are eusocial insects, they form highly organised colonies that may occupy large territories and consist of millions of individuals. The colonies are described as “superorganisms” because the ants appear to operate as a unified entity, collectively working together to support, supply and defend the colony. Red (fire) ants range in size from 2 to 6 mm and are mostly red or black in colour. When creating Sna-ke eyes I took the similarity between fire ants and native american tribes. As far as the racial stereotype goes, the most obvious thing is the red “skin” color. But besides that, imagine the vast land inhabited only by numerous organised tribes of indigenous ants who hunt together and have their own culture. As fire ants are more aggressive than others, they could be easily compared to Apache tribes, who were pretty brave and fierce warriors. Later, they were pushed back by other “civilised” species, lost their territories, were used as a work force (because ant can actually carry up to 100 times its own body weight) and were hunted down. Sna-ke eyes, as the tribe’s shaman had chosen the solitary life of a hermit, far away from the civilisation that caused the demise of his people. The name Sna-ke eyes also hints several meanings.

The ant’s head contains many sensory organs. Two antennae are attached to the head and can detect chemicals, air currents, and vibrations. There are also two strong jaws – the mandibles, used to manipulate objects or for defense. Ants also have six legs, each terminated with hooked claws. 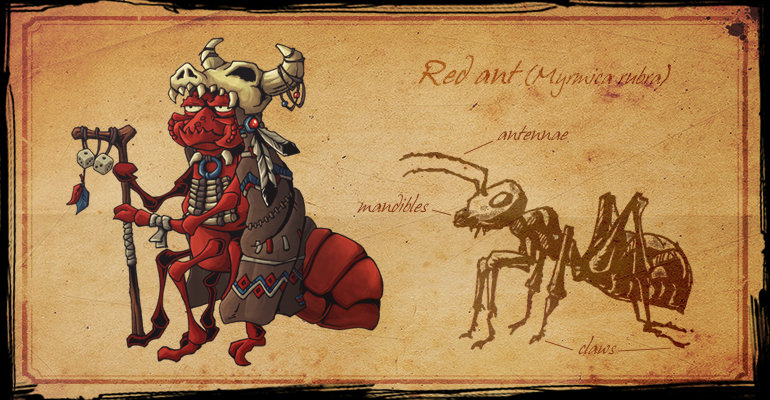 When I said before that insects look like tiny aliens, it is twice as true for mantises. They have triangular heads with bulging eyes supported on flexible necks. Some species can rotate their heads nearly 180°. Their forelegs are greatly enlarged and adapted for catching prey (called “raptorial legs”). While remaining stationary, they have forelegs folded like they are praying – hence the name praying mantis. This was the main reason for choosing mantis as the priest Padre (father in Spanish). But if you know something about their mating rituals, there is a serious reason why Padre is distrustful of women and chose a life of a priest. Female mantises sometimes practice sexual cannibalism – eating their mates after copulation or sometimes decapitate males just before or during mating. But this is actually true only for some (of over 2400) mantis species.

The next part of this series will be focused on some enemies and bosses that we already have in the game. And those are also pretty interesting creatures. Meanwhile, be sure to follow our progress on facebook, twitter, or instagram.